The share of total superannuation held by Millennials has more than doubled in the past decade, but younger generations are also the least satisfied with the financial performance of their super fund.

The share of super held by Millennials increased from 6.4% in September 2007 to 14.6% in September 2017, according to figures released by Roy Morgan Research. This represents an increase of $226 billion.

“Gains in superannuation market share over the last decade were seen across all three of the younger generations, with Generation X up 8.7% points (to 36.2%), Millennials up 8.2% points (to 14.6%) and Generation Z up from zero to 1.9%,” said Roy Morgan Research. 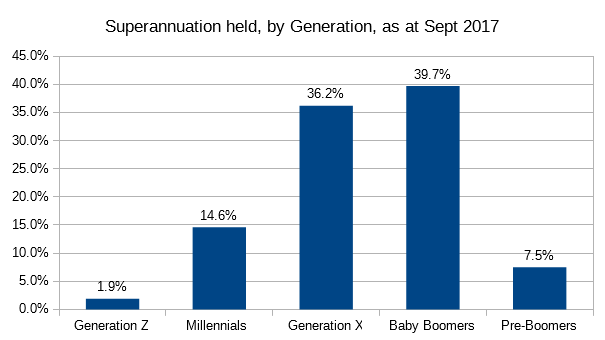 Younger generations were the least satisfied with the financial performance of super funds, according to the same research. Though this may be, in part, due to their lower super balances, which tends to be associated with lower satisfaction.

“It is a major challenge for superannuation funds to engage the younger generations in a long term issue such as superannuation, when they are most likely to have shorter term priorities such as housing affordability and lifestyle,” said Norman Morris, Industry Communications Director for Roy Morgan Research.

“This research has shown that due to the compulsory nature of superannuation, Millennials, Generation Z and Generation X are where the greatest growth potential now lies. Baby Boomers and Pre-Boomers are becoming less significant for superannuation growth in the long term due to retirement and the associated drawing down of their superannuation balances.”

“The very low satisfaction levels among the younger generations of around 50% are likely to lead to low brand loyalty and engagement. Industry funds with their higher satisfaction levels should have a growth advantage over retail funds if this lead in satisfaction with performance can be maintained.”