The Department of Human Services (DHS) has reported a continuing increase in applications for early release of superannuation.

However approved applications for early release of super are not growing at the same rate, with 11,728 approved in 2013/14, up 1.89% from the previous year. 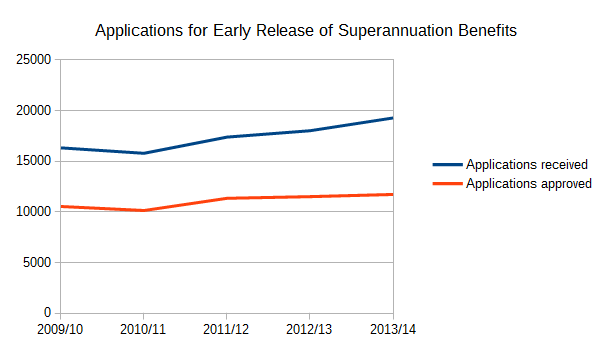 According to the DHS:

The Early Release of Superannuation Benefits programme allows eligible people to draw on their superannuation benefits under specified compassionate grounds in a time of need.

DHS has responsibility to consider applications for early release of superannuation on compassion grounds, such as medical treatment or paying a mortgage where there is “imminent threat of sale.” Additionally it is up to the superannuation fund to allow any release approved by the DHS.

The DHS was also responsible for the Small Business Superannuation Clearing House, until it was transferred to the ATO from 1 April 2014.

The DHS annual report says that:

The number of employers registered with the clearing house had been declining, down from a high of 21,920 to 15,573 before the service was transferred to the ATO. However according to the ATO annual report this decline appears to have reversed, with over 24,100 employers now registered.