According to the ATO its efforts, including SuperSeeker and working with super funds, has resulted in a 30% drop in the number of lost superannuation member accounts. A recent statement by the ATO said:

“The culmination of these efforts has resulted in the number of lost member accounts at 30 June 2014 reducing by over 30% in comparison to 30 June 2013, with an associated reduction of over 10% in the value on the Lost Members Register.”

“Lost uncontactable and lost inactive accounts are still held by super funds, whereas unclaimed super money and SHA accounts have been transferred to the ATO. ”

A large portion of this swap from lost to unclaimed is likely due to the increase to the threshold at which lost superannuation is transferred from super funds to the ATO, from $200 to $2000. It is the announced intention of the Government to increase this limit to $6,000.

However the statistics do show a decrease in the total value of lost and unclaimed super, down over $2 billion to $16.78 billion as at 30 June 2014: 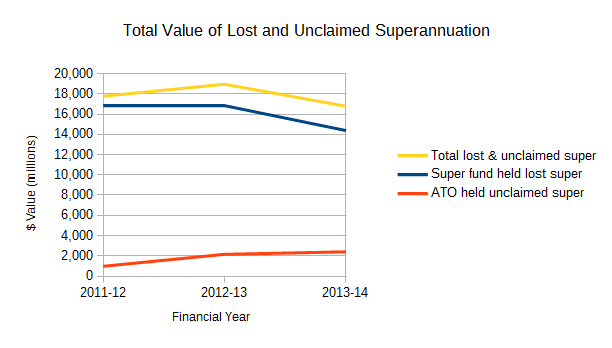 What is the ATO doing to reunite people with their lost super?

In the 2013/14 financial year the ATO says over 549,000 SuperSeeker searches were made, consolidating more than 68,000 super accounts, with a total value of $277 million.  Since March 2014, 290,512 super accounts, worth $1,258 billion has been reunited with lost members. “Our strategies to reduce the numbers and values of lost accounts continue to be successful”, said the ATO.

The ATO has been working with super funds using “collaborative compliance approaches”, which has resulted in the number of lost member accounts dropping from over 2,250,000 in May 2013, to “just over” 655,000, with a drop in the value of lost super by $1.4 billion to $361.5 million. Other strategies include the use of email and SMS to try and contact lost super fund members, with this returning close to $8.5 million. The ATO says it will continue to use such communication methods to “to reunite individuals with ATO-held amounts including SMSF members and high value unclaimed super money owners.”

The new powers for the disclosure of TFNs to trace lost super has resulted in the ATO providing 1.7 million corrected TFNs to super funds. However many “rightful owners are unlikely to be located and reunited with their super” due to the lack of good data. Due to the lack of data some accounts aren’t shown on SuperSeeker.

The ATO points out that it can be easy to lose super, including by changing name, address or employment and that “having several super accounts could mean that fees and charges are reducing their overall super investment”. The focus by the ATO in the future is to “develop and implement preventative strategies at key life cycle points to encourage individuals to keep track of their super”.