More people support stopping refunds of franking credits than oppose it, according to a new poll.

The latest Guardian Essential poll found 39% total support for stopping refunds of dividend franking credits. 30% in total oppose the measure, with 31% answering ‘don’t know’. Included in these figures are 15% who ‘strongly support’ stopping the refunds, and 14% who ‘strongly oppose’. Labor has a policy of stopping franking credit refunds for many taxpayers, though there are differences between Labor’s policy and the question asked. 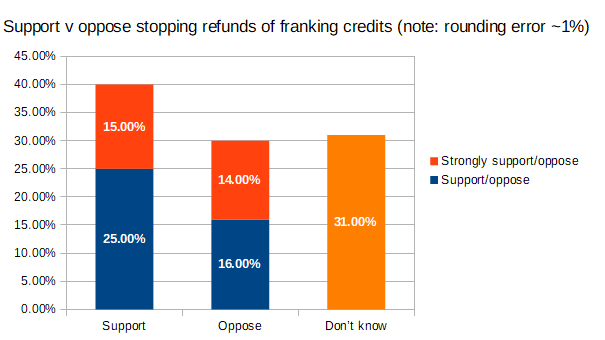 50% of those who vote Labor either support or strongly support the measure, compared to 32% of Coalition voters. 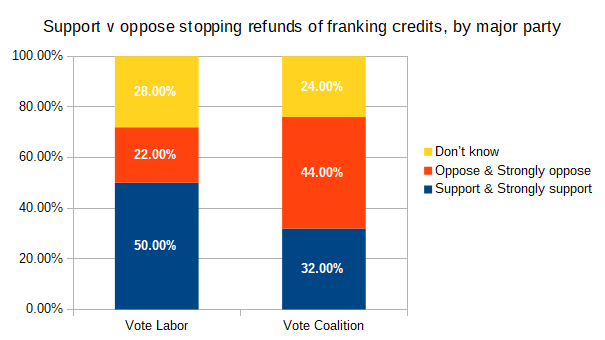 Comparing voters, only the Coalition had higher levels of opposition to stopping refunding of credits (44%) than support. Labor, Greens and Other voters all had more support for the measure than opposition.

Respondents with a household income over $78,000 support stopping refunds 48%, and those with a university education 46%.

When companies pay dividends to Australian shareholders out of after-tax profit, shareholders receive franking credits, which they can claim as a tax deduction. If the shareholder does not pay any tax, they receive a cash refund from the tax office. This system is known as “dividend imputation” and these cash payments cost the Government about $8 billion per year. The Labor Party has proposed to end the cash refunds for imputation credits. Taxpayers will still be able to claim a tax deduction. Do you support or oppose ending the cash refunds?

The question does not state that, under Labor’s policy, Age Pensioners will be exempt (also, technically, franking credits aren’t a tax deduction).

The same poll found that, Federally, Labor is ahead of the Coalition 54% to 46% on a 2 Party Preferred basis.

7 thoughts on “Stopping refunds of franking credits has more support than opposition: poll”