Government changes to legislation mean that the superannuation guarantee is likely to stay at 9.5% until 1 July 2021, and only reach 12% in July 2025.

The Government made a deal with the Palmer United Party to pass the repeal of the Minerals Resource Rent Tax. As part of the deal the LISC will be kept for a couple more years, but increases in the superannuation guarantee will be further slowed.

The letter from Mathias Cormann to Clive Palmer outlining the deal is available online.

After being introduced to the House of Representatives on Tuesday, the Minerals Resource Rent Tax Repeal and Other Measures Bill 2014 passed the Senate, with amendment. This is the third MRRT repeal bill, the first two having failed to pass. This bill received minimal debate in either house, despite the significant changes from the first two bills.

Under the previously legislated timetable the superannuation guarantee rate was to increase from the current 9.5% to 10% from 1 July 2015, however it now won’t reach this level until 1 July 2021.

At each stage in this process the Government has pushed back further and further the increase in the superannuation guarantee. Initially, under the first attempted repeal of the MRRT, the Government wanted to delay the increase from 9.25% to 9.5%, with it then reaching 10% from 1 July 2017. Then in the 2014 Budget it was announced this was to be pushed back a year, until 1 July 2018. Now it has been pushed back even further. 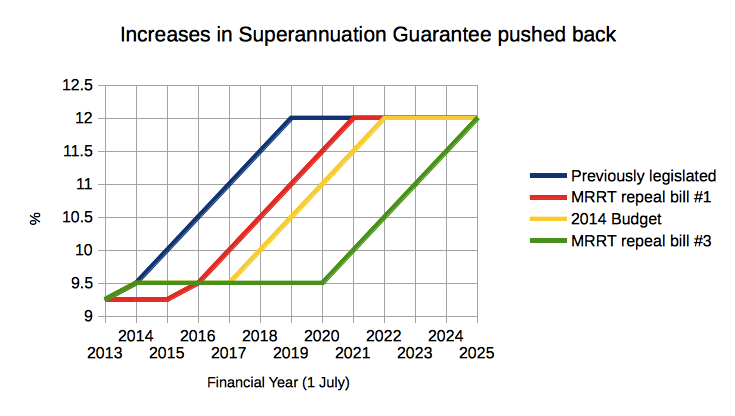 As part of the deal the bill temporarily keeps some measures, including the LISC and Schoolkids bonus. However this comes at the cost of the superannuation guarantee, as Treasurer Joe Hockey said in response to the passage of the bill:

“The reduction in savings will be recovered in the medium term by re-phasing the superannuation guarantee increase.“

Prior to the election the Liberal party had said that:

“Our clear, categoric commitment to the Australian people is that we are not going to make unexpected, adverse changes to superannuation.”

The spin from the Government is that this is not a broken promise because, as Tony Abbott said:

“There are no adverse changes as a result of this because, Madam Speaker, by delaying the increase in the superannuation guarantee levy, we are keeping more money in workers’ pockets.”

Tony Abbott has previously been quoted as saying that “compulsory superannuation is one of the biggest con jobs ever foisted by government on the Australian people”.

Response to the changes

The opposition’s Chris Bowen said the Prime Minister had “betrayed millions of Australian workers by freezing increases to the superannuation guarantee and abolishing the Low Income Superannuation Contribution”.

AIST CEO Tom Garcia called the changes a “broken election promise” which will “lead to further uncertainty about superannuation”.

“This decision undermines confidence in superannuation and brings into question this Government’s commitment to an effective retirement incomes system,” Mr Garcia said.

CPA CEO Alex Malley said the changes “risk billions of dollars in retirement savings and further underscore the need for a long-term vision and direction for superannuation policy”, and called for an independent body to set retirement policy.

Correction: An earlier version of this article said that the bill gave the Treasurer the power to set the superannuation guarantee by legislative instrument. This was present in the bill passed by the House, but is not in the final version of the bill as passed by both houses. It was though that both the updated schedule and the new power were present in the final bill, but this appears to not be the case.