Encouraging use of corporate trustees for SMSFs

SMSFs are increasingly being set up with individual trustees rather than corporate trustees. The latest ATO SMSF statistics show that of SMSFs registered in 2014/15 only 5.44% had a corporate trustee.

This is part of a trend away from corporate trustees for SMSFs, which was remarked on by the Super System Review, also known as the Cooper Review. The final report of the Review said:

The Panel and various stakeholders have expressed their surprise at this trend in various consultations and submissions. It is widely accepted by professionals and the ATO that a corporate trustee is superior.1 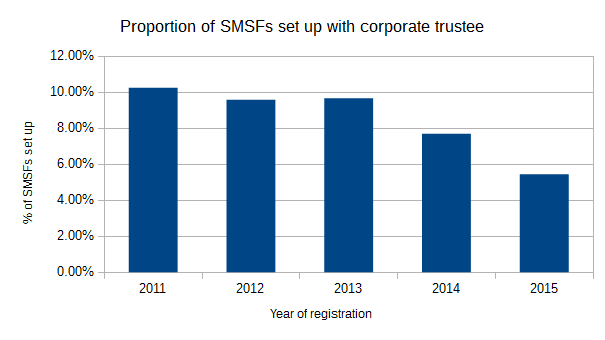 At the time the Cooper Review panel noted that “for the 2008 and 2009 financial years, nearly 90 per cent of new SMSFs were established without a corporate trustee.” The latest figures put it at closer to 95% of SMSFs being set up with individual trustees.

Information on why SMSFs are increasingly being set up with individual trustees is limited. The Cooper Review suggested lack of education and the higher cost of the structures could be factors.1

Corporate trustees for SMSFs do involve higher set up costs than individual trustees, however they also offer limited liability and require fewer changes upon the death of a member, easier removal and addition of members and clearer ownership of assets.

I recommend the 2016/17 Federal Budget include two measures to encourage the use of corporate trustees for SMSFs. Firstly, though ASIC offers a lower annual fee for spacial purpose companies, the set up fee remains. This ASIC fee can represent close to 80% of the cost of a company. Provision should be made in the budget for ASIC to reduce this fee for SMSF trustee special purpose companies.

Secondly, provision should be made for research into why individual trustees are increasingly being chosen for SMSFs. Based on this research an education campaign could be conducted by the ATO.

Now that the Government has decided not to adopt the recommendation of the Financial System Inquiry to ban most forms of borrowing by superannuation funds, including SMSF Limited Recourse Borrowing Arrangements (LRBAs), consideration should be given to outstanding issues with such arrangements.

Coming to wider attention during 2015 was the issue of low-interest rate related-party LRBAs potentially resulting in Non-Arm’s Length Income (NALI). Ordinarily an SMSF in accumulation phase pays 15% tax on income from an LRBA, while funds would pay 0% on pension phase income. The NALI rules increase the tax rate applying to income from a non-arm’s length arrangement to 45%, or 47% for years where the Temporary Budget Repair Levy applies. The ATO has issued several interpretative decisions stating that LRBAs with non-commercial rates of interest could result in NALI (ATO ID 2014/39 and 2014/40, later withdrawn and replaced with ATO ID 2015/273 and ATO ID 2015/284).

LRBAs should not be used to artificially increase the income of an SMSF beyond what would be expected from an arm’s length investment. However this issue has created significant uncertainty and concern for SMSF trustees and professionals. To resolve this matter I recommend the creation of a safe harbour provision for the NALI rules for SMSF LRBAs. This would be based on a benchmark interest rate, such as those published by the Reserve Bank of Australia. Provided the LRBA met the minimum interest rate, and other applicable conditions, the NALI provisions would not apply. Other conditions on the LRBA could include the payment frequency, the repayment of principal and a requirement for security. Arrangements outside this safe harbour would continue to be dealt with under the existing NALI rules.

I urge the Government to carefully consider the implications of proposals to tax superannuation contributions or fund income in super funds based on the income of the individual member.

Currently concessional superannuation contributions and super fund income is taxed at a flat rate. For some time there have been suggestions of taxing either, or both, based on the marginal tax rate of the individual member, potentially with a rebate. However there are considerable administrative issues with applying such taxes inside super funds.

I note that the Henry Tax Review recommended taxing super contributions at marginal tax rates, though this was to occur at the individual, not fund, level.

Super funds do not know the marginal tax rates of their members. Indeed the members themselves may not be able to accurately determine their own marginal tax rate until some time after the end of the financial year. Yet super funds are required to undertake transactions based on member balances at a particular time. For instance converting an accumulation balance to a pension balance or rolling over a balance between super funds. How are super fund meant to accurately determine the balance of a member if the fund does not know what rate of tax applies, and won’t know this for some time after the end of the financial year? For example, how would a super fund calculate the minimum payment of an account-based pension started in the 2015/16 financial year when the member may not lodge their tax return for that period until May 2017?

The restriction on employees claiming tax deductions for personal superannuation contributions should be repealed. Known as the ‘10% rule’, section 290.1605 of the Income Tax Assessment Act 1997 limits the ability to claim tax deductions for personal superannuation contributions to those earning less than 10% of their income from employment.

The incentives to contribute to superannuation should not be based on employment status.

While people may be able to enter into salary sacrifice arrangements with their employer, this is at the discretion of the employer and can increase administration costs.

I urge the Government to reconsider the decision to delay increases to the superannuation guarantee rate beyond not only what was previously scheduled but what was announced prior to the last Federal Election and in the 2014/15 Budget. 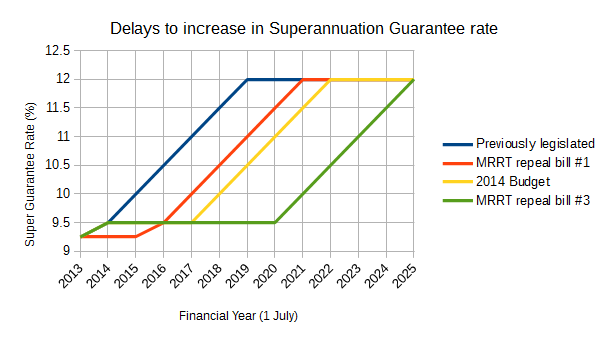 The policy document The Coalition’s Policy for Superannuation1, dated September 2013, said that the Superannuation Guarantee (SG) would rise from 9% to 12%, but “delayed by two years”.

This accords with the Minerals Resource Rent Tax (MRRT) repeal bill #1 line (red) in the above graph. However as currently legislated a 12% SG rate has been delayed by six years. That is, the SG rate was to reach 12% on 1 July 2019, however it will now not reach this level until 1 July 2025.

I urge the Government to reconsider these delays in reaching a 12% SG rate.

The cost of the LISC should be weighed against the future benefits to the budget of increased superannuation balances, especially amongst those most likely to be eligible for the age pension.

The LISC is superior to the co-contribution as it is better targeted, and doesn’t require additional money to be found to contribute to super.

Additionally I recommend that the LISC be indexed to the rate of the Superannuation Guarantee (SG). When originally introduced the $500 LISC covered the full amount of contributions tax for those eligible: 9% of $37,000 at 15% = $499.50. However no provision was made for increases in the SG rate. As the SG rate increases the LISC will fall further behind in terms of offsetting the amount of contributions tax. Indexing the LISC to the SG rate will preserve the purpose of the measure.

This is a pre-budget submission for 2016/17 by SolePurposeTest writer Luke Smith, it has been published here with permission, he retains all copyright.